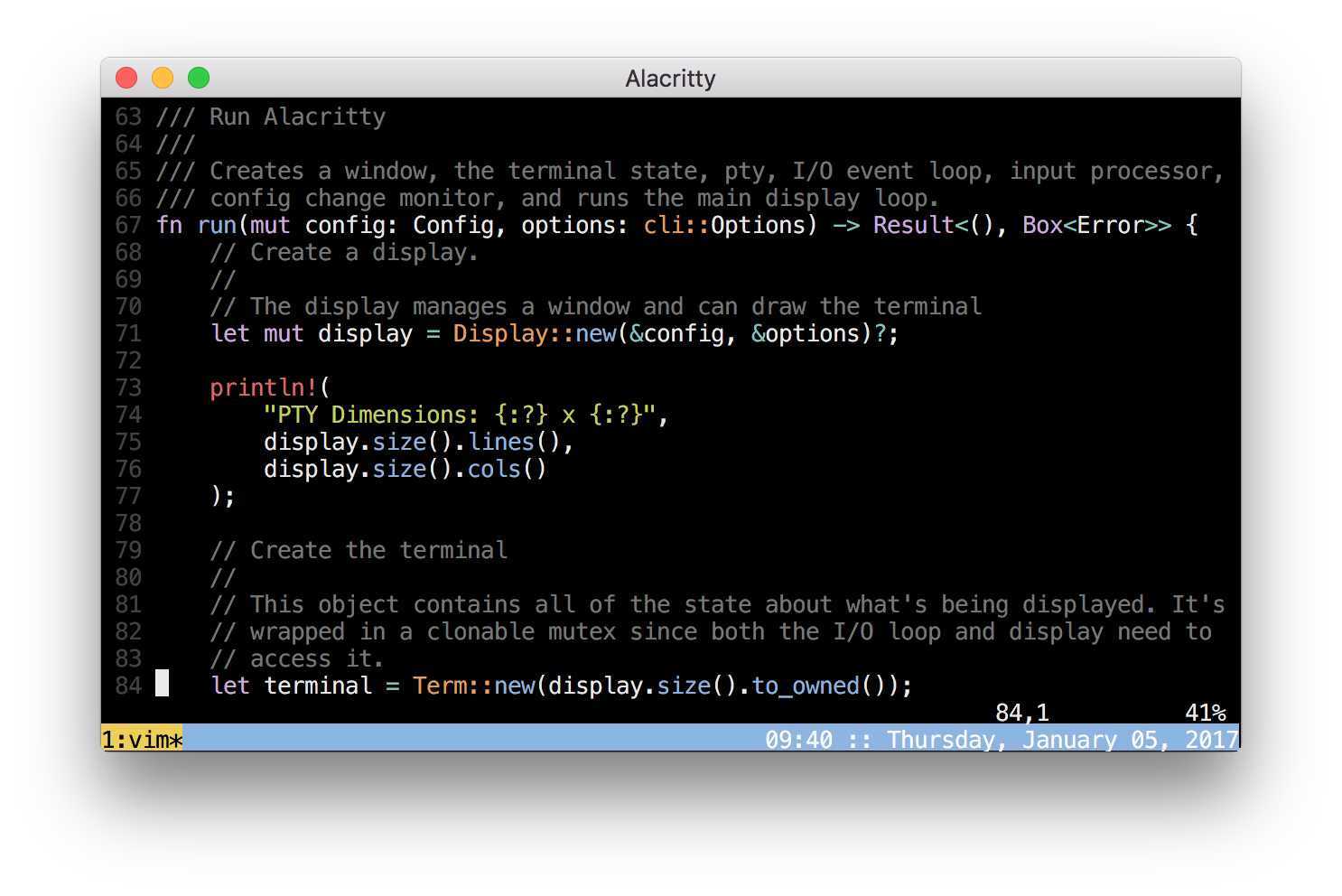 The rest of this post discusses what Alacritty is, why it was built, who it’s targeted at, and some architectural decisions that have enabled its unparalleled performance. I’ll be giving a technical talk at the January 2017 Rust Meetup in SF if you want to learn more.

Alacritty is the result of frustration with existing terminal emulators. Using vim inside tmux in many terminals was a particularly bad experience. None of them were ever quite fast enough. Even so, Linux does have some decent alternatives. For example, urxvt and st give good experiences. The major downside with those options is difficulty of configuration and inability to run on non-X11 platforms. The options for macOS are particularly slow–especially with a full-screen terminal on a 4k monitor. None of these terminals are cross-platform–they are usually married to the windowing and font rendering APIs of their native platform.

Alacritty aims to address these issues. The project’s architecture and features are guided by a set of values:

Many programs work correctly and without issue. vim, tmux, htop, various pagers and many other full-screen applications are rendered properly.

Alacritty is incredibly fast. Compare find /usr or equivalent with your favorite terminal emulator. Keep in mind that command will be faster the second time it’s run due to OS caching. Alacritty’s performance scales well with screen size. Running at larger resolutions will tip the scale further in Alacritty’s favor.

Alacritty’s font rendering is great. Native font rasterization libraries are used on each platform, and sub-pixel anti-aliasing is supported on both macOS and Linux.

macOS and Linux are supported in this pre-alpha release. Windows is not yet part of the list, but the initial offering demonstrates making a cross-platform terminal emulator is possible.

Being a pre-alpha release, there is still pending work in key areas

Alacritty’s biggest claim is that it’s the fastest terminal emulator available. If there’s a case where it’s not, then it’s either a bug in Alacritty or a misconfigured system. Alacritty is fast for two reasons–the OpenGL renderer and the high throughput parser.

Alacritty’s renderer is capable of doing ~500 FPS with a large screen full of text. This is made possible by efficient OpenGL usage. State changes are minimized as much as possible. Glyphs are rasterized only once and stored in a texture atlas. Instance data for glyphs is uploaded once per frame, and the screen is rendered in only two draw calls.

Alacritty isn’t concerned with trying to only redraw what’s necessary. The entire screen is redrawn each frame because it’s so cheap.

Alacritty is very good at processing huge amounts of text. Say that a user wants to cat 1gb_file.txt. There’s a lot of work for the parser to do. If Alacritty were drawing frames constantly on every change, it would take a long time to finish parsing and rendering the contents. Thankfully, V-Sync can help here.

V-Sync limits the frames drawn by Alacritty up to the monitor’s refresh rate. 60Hz is a typical value here. Using this number, there are 16.7ms available per frame. 2ms of that budget is occupied by the renderer, and the remaining 14.7ms are available to the parser to process that huge stream of text. Any text that is added to the terminal and scrolled past between frames will never be drawn. This is a huge performance win! The parser can process many MBs of data between frames, and the user will still see text drawn very smoothly.

Alacritty’s performance is enhanced by having a good parser. Rust helped significantly with this by enabling us to write small testable components and combine them without overhead.

Rust’s zero-cost abstractions enable building nicely abstracted components and later combining them as if they were hand-written as one initially.

The parser has an advance() method which advances the state and sometimes dispatches actions to the generic Perform argument. Here’s the signature:

Whenever a byte arrives from the pseudoterminal, it is passed to this advance method. Some bytes will cause state to accumulate in the parser; other bytes will trigger an action. Actions might be something like printing a character to the screen or executing an escape sequence. These actions are defined on a Perform trait which is passed to advance(). For example, here’s the first couple of methods on the trait:

To see how this turns into a zero-cost abstraction, let’s look at where the Perform methods are actually called:

Assuming the concrete Perform type requests #[inline] on these methods, they will likely be inlined at the call site here and avoid function call overhead.

This same pattern is used for multiple layers of abstraction. Alacritty’s vte::Perform impl actually delegates to an ansi::Handler type for actions which requires additional parsing (eg. csi_dispatch()). The result is that we get nice abstractions for things like vte::Perform and ansi::Handler, and the parsing code compiles into what looks like a big hand-written state machine.

Both the utf8parse and vte crates that were written for Alacritty use table-driven parsers. The cool thing about these is that they have very little branching; utf8parse only has one branch in the entire library!

The output of the procedural macro is the transition tables:

Whenever a byte arrives, the parser looks up the table for the current state and indexes with that byte. The value returned contains the next state and any action required to make that transition. This process doesn’t requires branching–it’s a simple, fast lookup.

Developing Alacritty required several pieces of library infrastructure which were not available. A non-GPL licensed cross-platform clipboard library, a vte parser, cross-platform font rasterization and fontconfig bindings were all needed to build this project. vte and utf8parse have been published on crates.io. The remaining libraries are still in Alacritty’s source tree and will be published independently at some point.

Here’s a quick run-down of the new libraries:

Alacritty is a very fast and usable terminal emulator. Although this is a pre-alpha release, it works well enough for many developers to be used as a daily driver. I’ve personally been using it as my primary terminal for a few months now.

For those wanting to learn more about the project, I’ll be giving a talk about Alacritty at the upcoming Rust Meetup in SF on January 19, 2017. I’m also planning some more technical blog posts about various subsystems of Alacritty.

Alacritty’s source is available on GitHub. Try it out for yourself!